AUG 7-9 | BRYAN, TX – It was wet, it was rainy, it was soggy and it was long, but after 3 days, a 3-hour rain delay and [almost] 90 holes of golf, two champions finally emerged at the 2nd annual State Match Play Invitational at the home of the Texas A&M golf team, the famed Traditions Club. What was supposed to be 36 holes of competitive qualifying on Day 1 was, unfortunately, shortened to 18 holes after severe thunderstorms pushed play back on the first morning and then halted it all together for almost 3 hours before the match play field was finally set.

Luckily, Day 2 was met with mostly sunny skies, and the wet conditions didn’t deter the 24 players from their 18-hole matches. 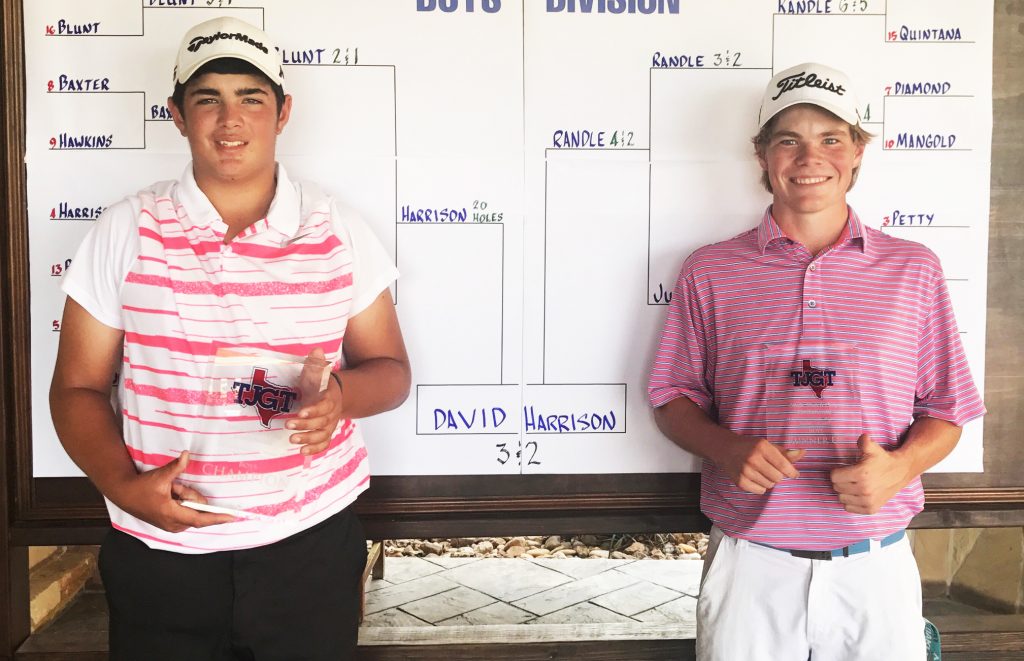 BOYS MATCH PLAY
It took a staggeringly low score of 1-over-par 73 to qualify for the Match Play in the boy’s division, and the 16 players that did qualify impressed early in their first round matches. The opening matches gave spectators everything they could ask for, as some of the top seeds dominated early, including The Woodlands’ Jack Randle, the No. 2 seed, who won his opening match 6&5, and Houston’s Jack Diamond, the 7 seed, who claimed a 5&4 victory in his first match.

Not all the matches were that one-sided, however, and the lower seeds made their presence felt early and often on Day 1. Grayson Blunt, who captured the 16th and final seed in a playoff before his first match, earned an upset 3&1 victory to start his day, and 11-seed Isaiah Henderson and 14-seed Lake Juban both won their opening matches against higher seeds. In the other 3 first-round matches, Chase Baxter (8-seed), David Harrison (4-seed) and Andres Anzaldua (2-seed) all advanced to the Elite 8.

The highlight of the afternoon matches on Day 2 came from Blunt, who advanced to the Final 4 as the 16-seed with his second-straight win.

In the Final 4, Blunt and Harrison squared off in an exciting match that extended beyond the 18th hole, seeing Harrison finally claim victory and punching his ticket in the final match over Blunt on the 20th hole. In the other Final 4 match, Randle continued his streak of great play, beating Juban on the 16th hole.

In the final match of the tournament, Randle had built a 2-up lead on the front nine with stellar play, but the back nine belonged to Harrison. Standing on the tee down 2 with only 9 holes left, Harrison went on a tear. He proceeded to win holes 10, 11, 12, 14 and 16 to close out the match 3 & 2, despite the best efforts from Randle. 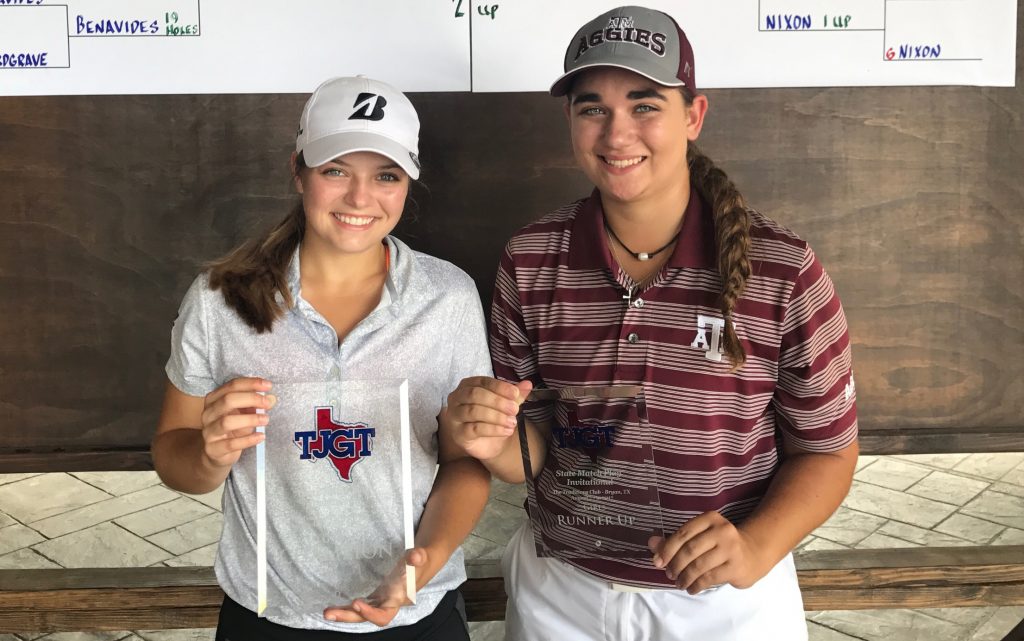 GIRLS MATCH PLAY
Eight players shot 80 or better (include two at 1-under-par) to advance to match play in the girls division, and while the first round matches on the boys side varied wildly from a competition standpoint, each of the 4 first-round matches on the girls’ side was highly competitive. In the morning’s first match, No. 1 seed Sky Sudberry had to claw tooth and nail to scratch out a 1 Up victory over Madison Goldberg. The 3-6 match between Amanda Jones and Mia Nixon went all the way to the 18th hole as well, with Nixon claiming a 1 Up win. Karina Benavides needed an extra hole to hold of Raelynn Hardgrave, and Madison Freeman squeezed out a 3&1 victory over Jordan Shackelford.

In the Final 4 matches, Benavides and Freeman took care of business a bit easier than in the first round, setting up an exciting final match that did not disappoint.

In the finals, Benavides battled back from an early deficit to take a 2 Up lead with four holes to play. However, Freeman was not ready to lie down and hand over the match. She hit the par-5 15th in two and had an easy two putt birdie to cut the lead to 1 up. Then, on the par-3 16th, Freeman almost holed her tee shot and was conceded her short birdie putt to square the match with 2 holes to play. Karina refused to relinquish the title, however, and perfectly executed back-to-back lengthy approach shots on 17 and 18, leaving her a couple of fairly easy two-putt pars to claim the Girls title.