SEPT 30-OCT 1 | BURLESON, TX – At Southern Oaks Golf Club in Burleson, 96 of the region’s best male junior golfers teed it up in arguably the best weather this year (high 70s, low 80s, sunshine, light breeze) at the 2018 LoneStar Boys Invitational, part of the Callaway Elite Championship Series. The golf course played long and tough, but the field was on point, as birdies were raining down across the entire course, and 18 under-par rounds were carded. It was a tight race for the prestigious Top 5, and in the end, Louisiana native Grayson Gilbert captured the championship with a one-stroke victory over Fort Worth’s Rodrigo Rodas.

In Round 1, Gilbert took early control of the tournament, firing a 4-under-par 68 to lead the field. After bogeying his first hole, Gilbert played nearly flawless golf, carding birdies on each of the four par 5s, as well as birdies on two of the shorter par 4s. However, more impressive may have been his par on the monstrous par-3 17th, which played more than 220 yards to the pin, into a slight wind.

Sharing the lead after Round 1 was fellow Louisiana resident Ryan Fulton, who had a stretch of 5 straight birdies while making the turn in his first round. Three players stood 2 strokes back of the lead after the first day – Pottsboro junior Austyn Reily, Spring’s Matthew Spaulding (class of 2022) and Montgomery junior Hunter Bott. Six other players shot under par in the first round, and two others shot even par. In all, more than 80 percent of the field shot 80 or better on Round 1, and the highest score was 85, a testament to the dominant strength of the field.

Scores were equally as impressive in Round 2, as 11 players broke par, with 6 rounds in the 60s. Grayson was once again spectacular on Day 2, backing his 68 up with a 3-under 69 that included an eagle on the short par-5 9th hole and a closing nine score of 33. His two-day total of 7-under was good enough for a one-stroke victory. Rodas was close behind, firing the lowest round of the day, a 5-under-par 67. It may have been the cleanest round of the tournament, as Rodas recorded five birdies and no bogeys, and actually could have played better, considering he failed to make birdie on either of the reachable par 5s on the back 9.

Coming in third place was San Antonio’s Christian Hansen, who leap-frogged up into the Top 3 on Day 2 with a 4-under-par 68, highlighted by an eagle on the par-5 15th hole, the toughest of the four par 5s. Fulton fell back a bit to T4 with an even-par round on Day 2, and Austin freshman J. Holland Humphries jumped up to tie Fulton in fourth place with a 3-under 69 in the final round. Humphries had a fairly clean scorecard as well in Round 2, pairing 5 birdies with only 2 bogeys. 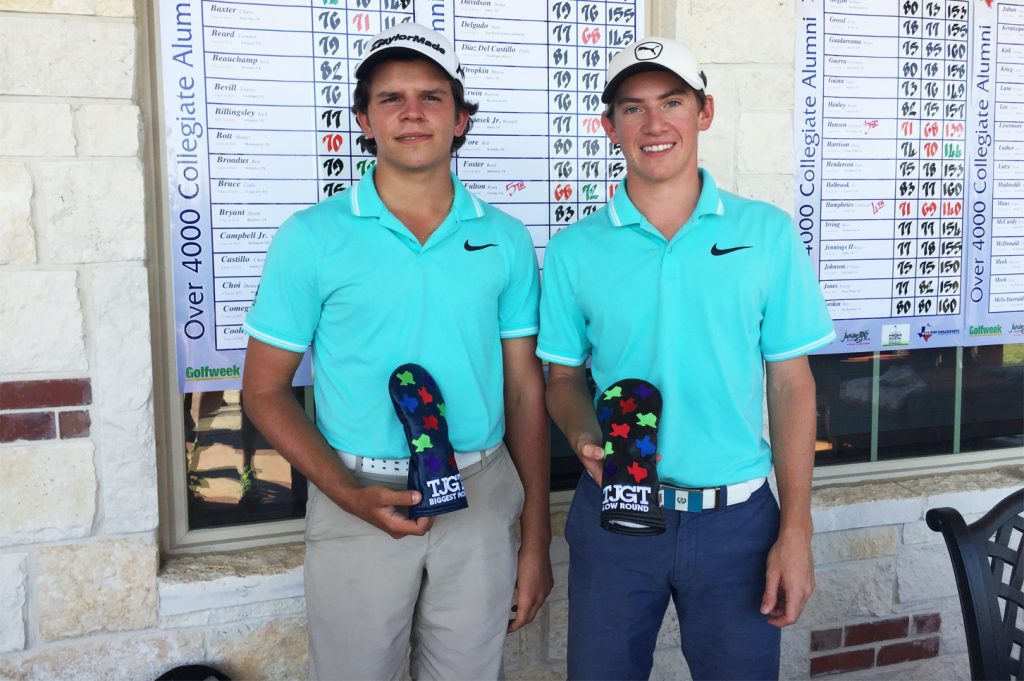 Along with his claiming of second place, Rodas also earned the award for “Lowest Final Round” with his 5-under 67. The “Biggest Move” of the tournament went to the Dominican Republic’s Juan Delgado. The junior, who lives in Fort Worth, fired a 4-under 68 in Round 2, a 9-shot improvement from his opening round, punctuated by an eagle on his last hole, the par-5 9th.

Want to see photos from the event? Check out the LoneStar Boys Photo Album on the TJGT Flickr page.