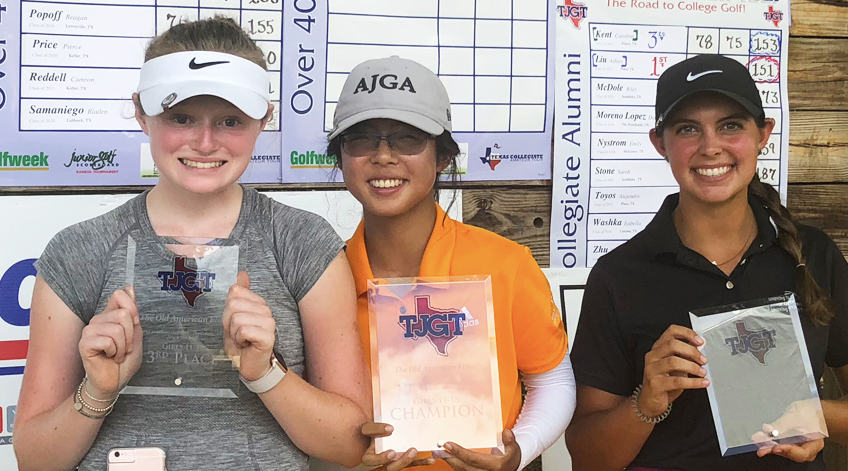 [JULY 9-10 | THE COLONY, TX] It was the shortest hole on the golf course that proved the difference for Plano freshman Ashley Liu during her final round of the Old American Elite – a birdie on the 112-yard par 3 17th hole proved to be just enough for her to capture her first major victory on the TJGT by one shot over Allen senior Allie Bianchi and Frisco sophomore Caroline Kent.

Liu started the final round one shot back of Austin’s Yingzhi Zhu, tied with Bianchi and Lantan’a Isabella Washka and just a few shots ahead of a packed leaderboard in the Girls Division. When Zhu stumbled out of the gate in the second round, Liu took the lead with steady play to start, making few mistakes on her front 9, including the crucial birdie on No. 17 (the girls division started on the back 9 on Day 2). When Bianchi and Kent made a bit of a charge late, Liu stayed steady, rattling off seven pars in a difficult eight-hole stretch on her back nine. Needed a bogey at the last hole, a difficult par 4 with bunkers protecting the fairway and green, Liu calmly rolled her putt in four a five, shooting 75 in the final round for a two-day total of 76-75=151 and the championship trophy.

Bianchi, who was paired with Liu in the final round, battled back on the homeward stretch to pull within one on the final hole, but two double bogeys early in her round proved to be too much of a deficit, as she finished in second, one shot back. Kent played beautifully on the back nine on Day 2, playing her final nine holes in even par, vaulting up the leaderboard to grab solo third place.

In the Boys Division, Plano senior Derek Hamilton opened up a four-shot lead with a two-under-par 69 in the first round, but a host of players stood within seven shots of the lead entering the final day, hinting at the excitement to come. Hamilton struggled early in his final round, making two doubles on the front 9 en route to a 7-over 42, but had not played himself out of the tournament.

Due to a weather delay in Round 1 that prevented roughly 15 percent of the field from finishing until the following morning, Dallas senior Cole McCabe – who had to finish his first round minutes before teeing off in Round 2 – finished his final round a good 90 minutes before the final grouping, but his 1-over-par round and two-day total of +6 set the standard for the leaders to meet. Hamilton and Kellar’s Cole Grossl tied McCabe at that mark, and the three were set for a sudden-death playoff on the difficult par-4 10th hole.

It was Grossl who hit the closest approach shot and looked to have control of the playoff as the three reached the green. McCabe, however, stole the spotlight when he drained a 20-footer for birdie as thunder clouds rolled in. When Grossl and Hamilton were unable to answer, McCabe lightly raised his fist in celebration, capturing his first major championship on the TJGT. Grossl and Hamilton finished T2, and Frisco’s Minas Manias tied with Arkansas’ Scott Tabor to round out the Top 5.

Want to see photos from the Old American Elite? View the tournament album here on the TJGT Flickr page.